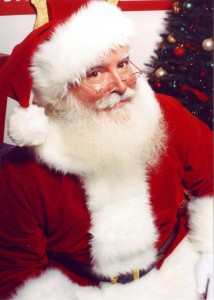 A 2008 magazine article deals with the most common dilemma Jewish parents must confront during the Christmas season. A question addressed to columnist Ceridwen Morris:

“Another Christmas is upon us, and I am totally dreading it. Our family is Jewish, and we usually just avoid the whole thing. But I don’t think we’re going to get away with that this year. Our almost-five-year-old asked about Santa Claus last year and we could brush it off. This year, she’s a lot more inquiring. My impulse is always to tell her the truth. I can’t bear to go along with the lie, especially when it’s a lie that excludes her from fun. Still, I don’t want her to traumatize her classmates by declaring Santa is a hoax. Any suggestions about how to deal with this situation? –Ho Humbug”

As a rabbi and also the grandfather of four little girls all of whom go to school where hardly any of their classmates are Jewish, this question definitely resonates. If the children went to school entirely with other Jewish kids, the answer would be easy. “We don’t believe in Santa Claus. It is our parents and family members who give presents on Chanukah.”

A little common sense can go a long way. There is no need to be on the defensive. You’re Jewish, which actually has its advantages at Christmas time. Your position on Santa may be easily explained. If your daughter asks, you can say, “Well, it’s not something we believe in, but Santa is something other people believe in him.” Hopefully, that will be sufficient and you can breathe a sigh of relief that you made It through another December.

You definitely can talk about this time of year being a special time when gifts are exchanged, but that different kids receive their presents in different ways. Some presents arrive in the mail (or by FedEx). Others get delivered by Santa Claus.

But, if your grandchildren are anything like mine, you probably won’t get off so easily. It may not be possible to avoid discussion with a five-year-old about whether Santa exists. The goal to keep in mind is to guide the conversation into understanding that people understand things in different ways. It is not the one person is right and the other is wrong. On the simplest level, it could be as tangible as asking: “What is your favorite flavor of ice cream?” And if she says “I love strawberry,” Then ask: “Are kids who love chocolate wrong?” That can be the beginning of a much longer conversation about understanding that each of us sees things in our own way, but that make others wrong if they don’t feel the same way.

While the primary purpose of this conversation may be to reassure your daughter that she’s not missing out on any presentss, there’s a much more important purpose, namely to open up a discussion about tolerance using real-life examples of different people who believe different things and have different preferences. It may not be possible to avoid discussion among five-year-olds about whether Santa exists. The goal is to guide that discussion into a respect for differences.

I think it is especially important to avoid, even inadvertently, placing your children in a position of debunking Santa Claus to their classmates. There is a real chance for brewing resentment, whether between children or even between parents. Just about the last thing any parent needs if for their child to be ostracized by other children for saying something as innocent as: “I know that Santa Claus isn’t real.” Add to that the real possibility that such a statement potentially could cause real animosity between Christian parents and others, not only Jews, but also Muslims, Buddhists, Hindus, as well as secular people. After all, we live in a culturally diverse society with a wide array of beliefs and practices.

Let us turn the tables for a moment and ask how Jewish parents would feel if their child came home frightened because another child had told him that he was going to hell because he did not believe in Jesus Christ. This is not all that implausible. Jews and other non-Christians have been told this for centuries. Should that occur, instinctively almost every parent would want to rush to reassure their child. In addition, that parent would be sure to respond with anger toward those who taught their children such a thing.

There simply is no reason to make your child into the Grinch. Perhaps the best and easiest thing to teach your children to say is: “I am happy that Santa is bringing you’re Christmas presents, and I am happy that my parents are giving presents to me.”

Michael Sternfield has been a Reform rabbi for 40 years, most recently serving at Chicago Sinai Congregation from 1995 until 2013. He served for 20 years as spiritual leader of Congregation Beth Israel in San Diego, and briefly as the leader of the Durban, South Africa Progressive Jewish Congregation during South Africa’s historic transition to multi-racial democracy. He is now based in the Tampa/St. Petersburg/Sarasota area of Florida.